Living With the Parents I'm Losing to Alzheimer's 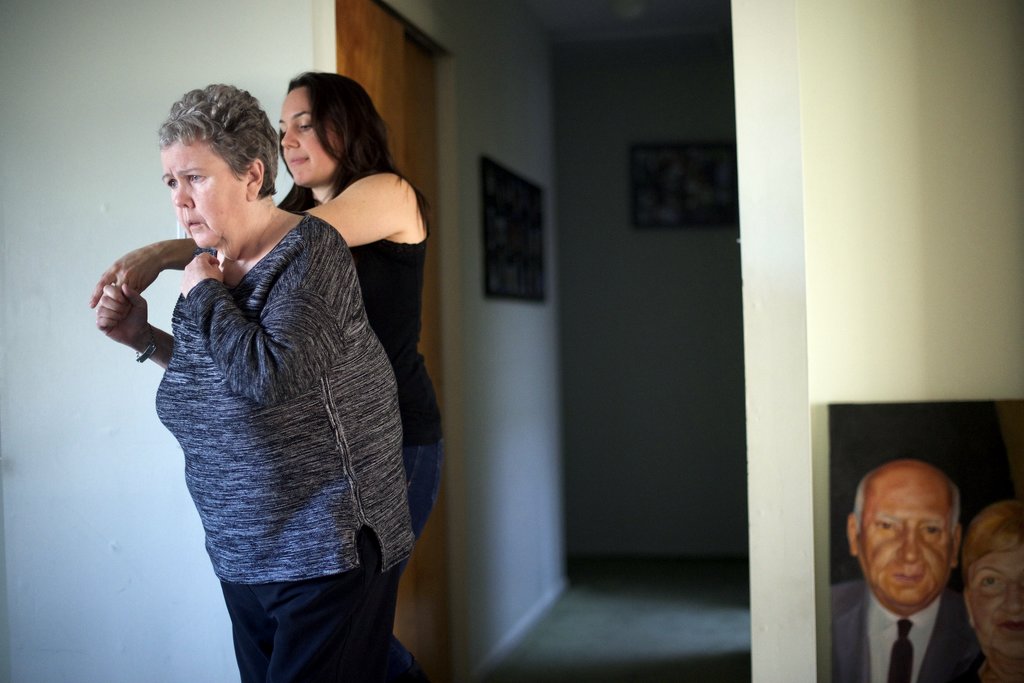 In 2010, Elizabeth Wolf, then 30, was living in Vermont, working for a nonprofit and happily exploring new pursuits, from raising chickens to contra dancing.

But after several disturbing phone calls from and about her parents, Louis and Nancy Brood, she moved back into the split-level in Mt. Laurel, N.J., where she and her siblings had grown up, with her now husband, Casey Wolf. She expected to arrange caregiving help for her parents, then return to Vermont.

Five years later, she is still taking care of her 81-year-old father and 65-year-old mother, both with dementia. Ms. Wolf, who volunteers with the Alzheimer’s Assoication, writes about the experience at upsidedowndaughter.com.

Her interview has been edited and condensed for space and clarity.

My parents called me one day in March and started singing “Happy Birthday.” It was unsettling. My birthday is in May.

My uncle called, too. He and my father had owned an upholstery shop in Philadelphia for 50 years, and it was really bothering him that my dad couldn’t do simple math anymore.

I don’t remember all the doctors’ appointments that led to Dad seeing a neurologist, but I do remember the appointment where they subjected him to the mini-mental test. He came away from that examination with an Alzheimer’s diagnosis.

We were very concerned about my mother, too. She was asking us the same questions over and over. I said I’d talk to the teacher whose classroom she worked in as an aide.

The teacher said, “Your mother is basically not functioning. She just sits at a table in the back of the classroom and stares out the window.”

It had been going on for a long time, and we had all been so focused on my dad we had missed it. We ended up taking her to the same neurologist, and she got an Alzheimer’s diagnosis, too.

I told Casey, “We’re going to come back for two months, October through December.” It became apparent very soon that we would need to stay longer.

The doctors told me that people with Alzheimer’s have an average life span, between diagnosis and death, of five to seven years. So I knew we’re in this for the long haul, whatever that looks like.

I take Mom to the bathroom. I have to take her every couple of hours, otherwise we have what happened this morning, when there’s not only a major accident, but the mess ends up everywhere and I have to get her in the bath.

I prepare their breakfast. She takes medicine for diabetes, hypothyroidism, high blood pressure, and she’s on seizure medication and two antipsychotics because she has hallucinations. She stopped swallowing pills willingly a few years ago — we were having all-out wars. Now we hide them in chunks of banana.

My dad goes to a day program for adults with Alzheimer’s and dementia. Five days a week, he gets picked up at 8:40 and comes back between 1 and 1:30.

I’m always looking for more activities to do with him. I found a local voice teacher, and once a week she plays the piano and they sing together, old songs he has in his deep memory recesses. “All the Way.” “Some Enchanted Evening.”

My mom doesn’t have much of an attention span for activities anymore. A lot of what we do all day is wander and sit and stare out the window.

At night, we have a motion sensor so that any time their bedroom door opens — if my mom has to go to the bathroom, she’ll wander into the hallway — a receptor in our room bings. It goes off maybe six times a night, on average. Some nights it feels like every half-hour.

One night recently my dad was so confused, up so many times, and I was exhausted and full of frustration and anger and overwhelming grief. I just went in there and cried in his arms, begging him, “Please, go back to sleep.” He didn’t understand, but he was holding me and crying, too, and saying, “I’m so sorry. I’ll do better. I’ll do better.”

I don’t know how to describe that feeling, where you just don’t feel like you can go on anymore. And I know I have a lot of things on my side relative to other people in this situation. A supportive husband. Paid help.

We just got a grant from the organization Hilarity for Charity. They gave us 25 hours of care a week for a year. We also have a caregiver from one of the state programs. So now we have help Mondays, Thursdays, Fridays and Sunday mornings.

But most of the caregivers aren’t able to handle my mom in the bathroom or bathe her, so often they’re assisting me. And when I do have help, I’m running around trying to do the other thousand things that need to happen to maintain a household. I also work part time from home.

Most of my “me time” is spent going to the gym; I see a therapist and get acupuncture a couple of times a month, too. These are the things I do to stay alive.

More than anything, the grief or loss I feel is in the form of loneliness. The isolation. I don’t know how to relate to people my age.

Once in a while I let myself think about what I’ve given up. Casey and I decided not to have children, but I feel like a mother to my parents.

I value the incredible intimacy I get to share with them. When I was a teenager, my mother was pretty critical; she ignored me for days at a time. I think she was overwhelmed by motherhood.

Now, this role that we share, it’s changed the dynamic, the history of our relationship. However many years down the line, looking back, I’ll think of the moments of tenderness I shared with her, every single day.

There was a point in May of 2013 — we’d been here two and a half years — when we had plans to move my parents into a facility. We were going to do a respite stay, and if they fit in, if it went well, we’d sell the house.

We did everything we could — we brought couches and furniture from their bedroom — to make the place feel homelike. But it wasn’t home. For my dad, it lasted three days. He started having panic attacks, to the point where he was throwing up.

He was still with it enough to call us. I remember getting a message from him, weeping. “It’s Daddy. Please, me and Mom want to come home.”

Everybody, including his doctor, said, “You have to leave him, you have to let him adjust.” I couldn’t do it. I would never judge the people who do, but I couldn’t.

They’ve been here 40 years. All my dad ever wanted was this home. Who am I, if I take my dad from his home?